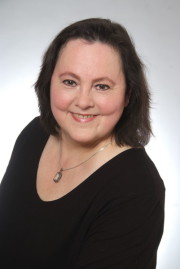 Born on 9. 3. 1961, in 1979 she was prize-winner at the Federal Song Contest in Berlin (Musical). During her vocal studies (Diploma, Continuation Diploma and Concert Solist Diploma) at the University of Music in Freiburg she was successful at the International Song Contest of Barcelona, had an invitation to lecture singing at the University of Education in Freiburg and was teacher for vocal Jazz and improvisation at the Jazz And Rock - School Freiburg.

From 1993 to 2003 she had an invitation to lecture singing at the University of Music in Karlsruhe and was music teacher at the Clara-Schumann-Gymnasium in Lahr (singing and piano).

She gave courses in vocal improvisation and vocal jazz at the Music Universities in Karlsruhe, München, Hannover and Freiburg and the State Academy in Ochsenhausen.

Since 2004 she is working as vocal teacher at the University of Education in Freiburg.

Together with Dr. Gerhard Friedrich she also won reputation as composer, author, illustrator and inventor of wholistic pedagogical games for preparatory and primary school.